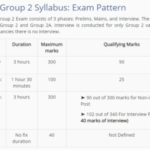 (i) Scientific Knowledge and Scientific temper – Power of Reasoning – Rote Learning Vs Conceptual Learning – Science as a tool to understand the past, present and future.

(ii) Change and Continuity in the Socio – Cultural History of India.

(i) Human Development Indicators in Tamil Nadu and a comparative assessment across the Country – Impact of Social Reform movements in the Socio – Economic Development of Tamil Nadu.

(ii) Political parties and Welfare schemes for various sections of people – Rationale behind Reservation Policy and access to Social Resources – Economic trends in Tamil Nadu – Role and impact of social welfare schemes in the Socio – economic development of Tamil Nadu.

(iii) Social Justice and Social Harmony as the Cornerstones of Socio – Economic development.

(v) Geography of Tamil Nadu and its impact on Economic growth.

Title 4 – Essay writing on the following topics from ‘Thirukkural’

(a) Significance as a Secular literature

(b) Relevance to Everyday Life

(c) Impact of Thirukkural on Humanity

The Selection Procedure is based on